Slowing down, speeding up and Iain Abernethy seminar.... 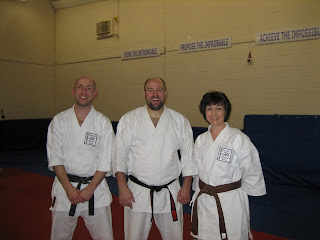 I decided to slow down a bit this week. I don't think I've been giving myself enough time to recover between sessions.

Over the last few weeks the schedule has been:

So, not a lot of time for recovery between sessions! My muscles have been aching and I've been more stiff than usual following a session so I think a slow down was definitely needed.

This week I've laid off the push up challenge. I repeated week 5 last week and still failed to achieve 45 consecutive push ups in the exhaustion test. I decided that rather than repeat week 5 again I would take a week out and then try the exhaustion test again to see where I'm at.

I've still managed to fit in my two long home training sessions but I've concentrated very much on karate rather than general fitness. I had been determined to pin down my ippon kumite techniques this week but alas time ran out on me. This will definitely be my job next week...

Sensei was clearly not aware that I was trying to rest up a bit this week and decided to have a fitness binge with us on Wednesday. This consisted of push ups, sit ups, squats, burpees, running around....and that was just the warm up. We then moved onto pad work and after doing a few minutes of punching we were straight into doing the following sequence: 10 kicks with each leg of - front kick, roundhouse kick, back kick, side kick, spinning hook kick and jump kick! Just when we thought it was all over Sensei shouts 20 push ups! Followed by a 1 minute plank, followed by standing in shikko dachi (horse stance) for 1 minute. Get a drink! Then immediately into kata with bunkai demonstration. After doing 3 different kata : Get your sparring mitts on! Two rounds of sparring was then followed by some stretching. There was definitely some soaking wet gis after that session!

Last Sunday I attended a seminar with Iain Abernethy. This is the second seminar I've attended with him and it is always a great experience. I can't believe how fast that guy can execute self-defence techniques - you just wouldn't stand a chance against him! Anyway we focused on the bunkai from pinan nidan (there's always more to that kata than meets the eye) and then looked at bunkai from Bassai Dai. This was especially useful for me as Bassai Dai is one of my kata for shodan grading. Iain is such an easy, approachable guy with lots of amusing anecdotes to tell in between teaching us. Apparently he was impressed with our standard of kata which he said made it easier for him to teach us bunkai. Nice to know I can do something right!

The photo above shows left to right: Steve Hegarty (my instructor), Iain Abernethy and me!
Posted by Sue C at 03:23 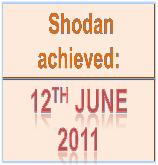